JASPER, Georgia – Arizona gubernatorial candidate Kari Lake told The Georgia Star News she plans to secure the southern border of the United States with her “Defend Arizona” policy, which includes the destruction of drug tunnels and surveillance drones used by Mexican drug cartels. The Republican frontrunner traveled to Georgia on Thursday to support David Perdue in his bid to upset incumbent governor Brian Kemp.

“When we discover drug tunnels, we’re going to blow them up. We’re not just going to pour a little bit of cement in where they can easily jackhammer that out and start running drugs again,” Lake said. 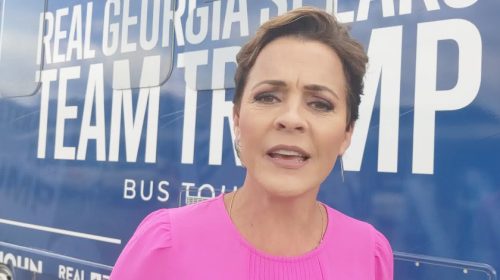 The former Phoenix television news anchor blames the escalating border crisis on President Biden, who she said is “trying to destroy this country.”

Lake had harsh criticisms for Biden, whom she called an “illegitimate president” and someone who “we’re not going to take orders from” as it pertains to the border crisis.

“We will not let him take Arizona down,” she said.

As part of her blueprint to help secure the border, Lake told The Star News, “We’re going to get our Arizona National Guard to the border. We’re going to arm them. We’re going to ask other states to bring their Guard in as well, to protect our border and make sure that we stop the drugs from coming in.”

Lake discussed the cartels’ sophisticated intelligence-gathering capabilities through the use of remote-controlled drones that give the drug-running groups real time knowledge of law enforcement’s position, number, and movements.

She said, “It’s outrageous to me that we’re allowing the cartels who have operational control of our borders to fly their drugs back and forth every day, all day. And they watch what we’re doing. They do surveillance on our law enforcement. They drop off drugs. They even try to hurt our law enforcement. We should be shooting those drones out of the sky. And my plan, my border plan will do that.”

She said, “States can protect their citizens from invasion at the border. And we intend to do that. We will finish president Trump’s wall on both state and federal land using the materials at the border. ”

“We can secure our border,” Lake said, adding that Arizona has a key role to play in the nation’s security. “This is the most important race in the country – and the reason being, we can’t afford to lose another border state to a Democrat, or we won’t have a country.”

Addison Basurto is a reporter at The Georgia Star and The Star News Network. Follow Addy on Twitter and GETTR. Email tips to [email protected]