The work of a Planned Parenthood sex educator whose viral TikTok videos instruct children and young teens to use “spicy toys” and fruits and vegetables for sexual pleasure has been condemned by a former sex educator also trained by the abortion industry giant.

Monica Cline, who, prior to her conversion, educated children as young as middle schoolers to engage in sex acts “safely,” said in comments sent to The Star News Network that Planned Parenthood sex educator and digital creator Mariah Caudillo is engaged in a “crime against children” paid for by American taxpayers.

“To the tune of $600 million, American taxpayers are supporting Planned Parenthood’s corruption of our nation’s children and intentional efforts to suppress the role of parents in the lives of their kids,” Cline said, adding that Caudillo “proudly admits to normalizing and teaching children how to find sexual pleasure by demonstrating the use of sex toys for sexual arousal and how to purchase sex toys online.”

“Because anyone can view TikTok, she also teaches other adults how to engage in pleasure-seeking sex education instruction with children,” Cline noted.

Caudillo, who has set her TikTok account to private, works for the largest affiliate of Planned Parenthood in Mar Monte, California – one that was referred by the Senate Judiciary Committee in December 2016 for investigation and possible prosecution for its “paid fetal tissue practices.” 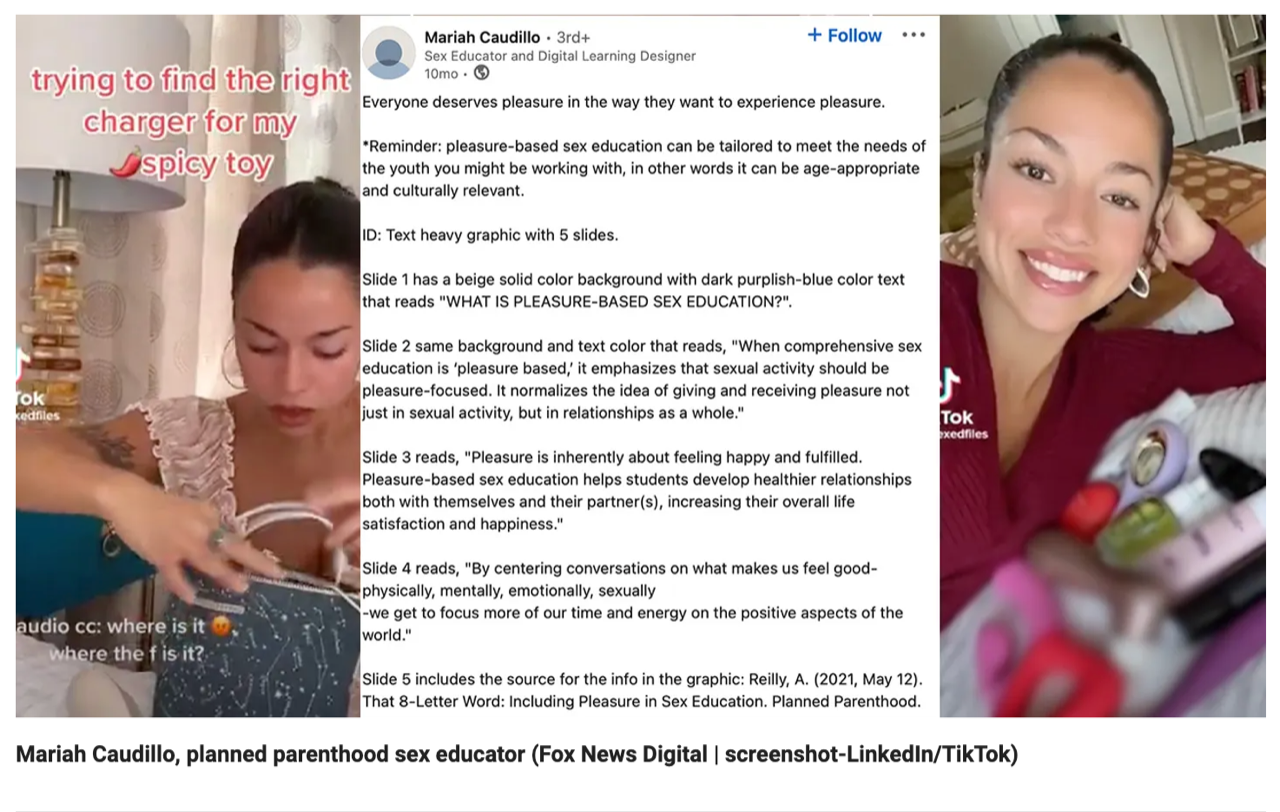 Caudillo directly targets young people in her “how-to” videos on the use of “spicy toys” for self-pleasure.

Is there a certain age you have to be to buy a spicy toy? To my knowledge, there’s not an actual law that prevents young people from purchasing spicy toys. But typically, adult stores have age restrictions, which prevents young folks from purchasing spicy toys in person. You usually have to be 18 and up to shop at these… adult stores … However, it’s not illegal to buy spicy toys online, even as a teen, which most people do. You just have to purchase them with a valid credit card, debit card or gift card. So the best thing to do, if you’re curious about spicy toys, or you just want to explore what’s out there or if you want to purchase them, or one, – whatever – is to do so online. Do keep in mind that some of these stores also have age restrictions on their website, but like this app, people can access them anyway.

According to the report, in her TikTok videos, Caudillo has pretended to use a “spicy” sex toy on herself and has displayed her array of favorite toys.

“Everyone deserves pleasure in the way they want to experience pleasure,” Caudillo says. “*Reminder: pleasure-based sex education can be tailored to meet the need of the youth you might be working with; in other words, it can be age-appropriate.”

“You add 5 min to your life every time you use a vib rat or*” Caudillo notes in one frame, and then exclaims, “I’m gonna live forever!!!” 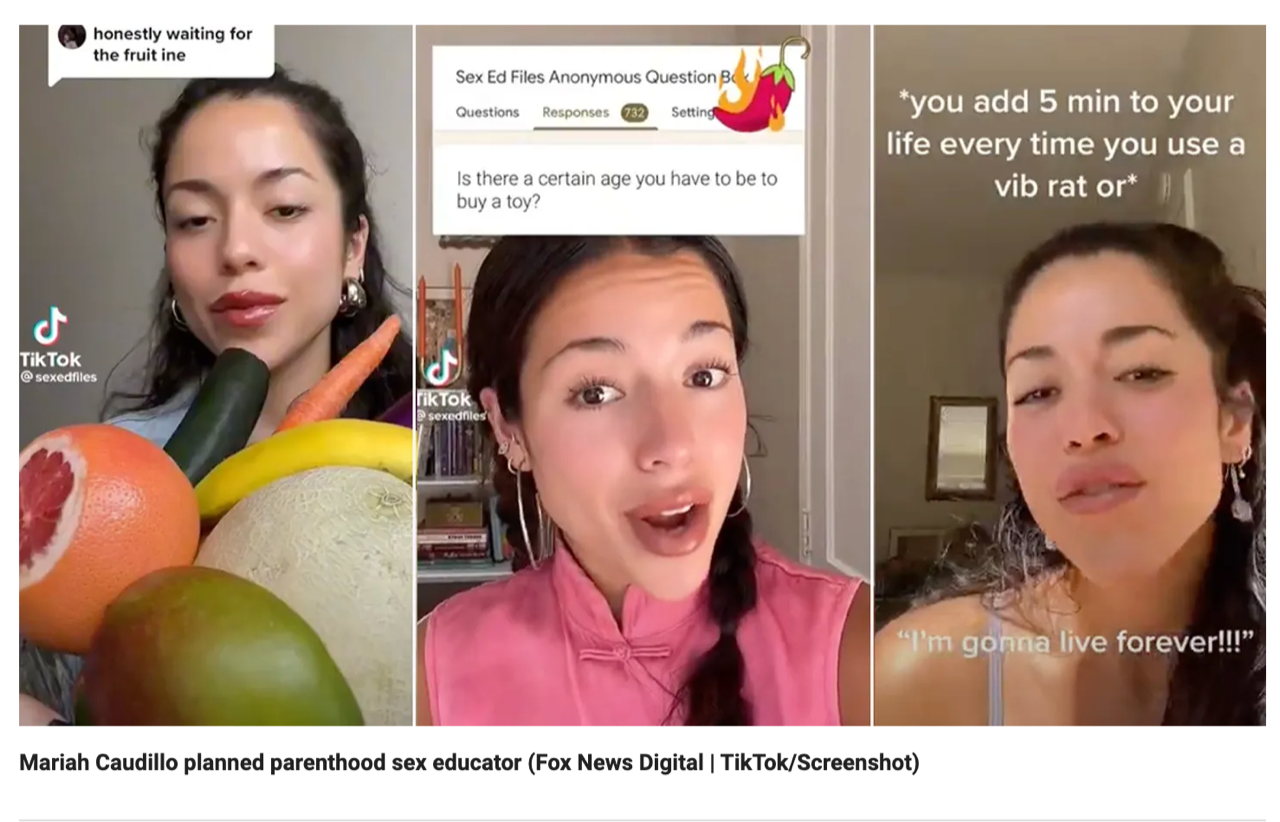 Caudillo also addresses how young people can hide their “spicy toys” from their parents and how individuals (age range is not clear) can use fruits and vegetables as their sex pleasure objects, Fox News reported.

The Daily Mail reported that, in one video, Caudillo suggested items such as an electric toothbrush and an X-Box controller can become a “spicy toy.”

In a post on her former LinkedIn account, Fox News noted Caudillo related her work to the woke social justice narrative now embraced by the abortion industry.

“[C]omprehensive sex education curricula is mostly written by white folks who have a tendency to do the bare minimum as it relates to… acknowledging the intersections of racial justice, social justice and reproductive justice,” she reportedly stated.

Cline elaborated in her comments:

On May 1, 2022, Michael Heimbach from the FBI Criminal Investigative Division, Crimes Against Children Unit testified before the U.S Senate, describing the actions of child sexual abuse predators. These acts included demonstrating sex acts to children by commonly using pornography to teach children about sex, purposely lowering the inhibitions of kids by showing them pictures of other kids engaging in sexual activities, and desensitizing children to sex by showing pornography to their intended victims.

“Let’s call these videos by Planned Parenthood’s own employee what they really are, according to the FBI: crimes against children,” Cline asserted.

Libs of TikTok recently posted to Twitter about the “Rainbow Room,” a “club which is funded by Planned Parenthood.”

“They partner with teachers to offer support for discussing topics relating to LGBTQ in school,” the post states. “Here’s a photo from one of their programs. Kids are pictured playing with sex toys and simulating sexual acts.”

“The Rainbow Room” is a club which is funded by Planned Parenthood. They partner with teachers to offer support for discussing topics relating to LGBTQ in school.

Here’s a photo from one of their programs. Kids are pictured playing with sex toys and simulating sexual acts. pic.twitter.com/pFhNy1tc6f

And we have tons of Republicans who vote to send billions to Planned Parenthood. Sickening.

In November 2019, the Harrison Daily Times reported that Carol Everett, who formerly owned and operated abortion clinics before her pro-life conversion, warned parents how the abortion industry uses sex ed programs to groom children to promote their sexual behavior which, ultimately, sells abortions for clinics.

“I sold abortions,” Everett, who spoke at a fundraiser for an Arkansas pregnancy resource center, said, according to LifeNews. “How do you do that? It’s called sex education.”

Former Abortion Clinic Owner: We Pushed Sex Ed on Kids to Create a Market for Abortionhttps://t.co/uJej3upyce

Everett said her work in schools teaching sex education was really all about selling abortions to profit abortion clinics.

“You have to break down the natural modesty, separate them from their parents’ values and you have to become an expert (sexpert) in their life,” she explained:

My goal was to get them pregnant. We offered low-dose birth control pills for $45 a month which we knew she would get pregnant on. Abortion is a method of birth control for many and there is more than a 50 percent repeat rate.

“You don’t take your kids out and get them really good and drunk and teach them how to drive safely,” Everett continued. “We give them a moral absolute — don’t drink and drive, you can be killed. Why would we compromise them in this important area of their sexuality by giving them a low moral standard to live down to, rather than the highest and best — God’s plan for marriage which still works every time.”