Investigations are continuing into the election anomalies in Arizona, where Republicans performed fairly well except for in the top four Trump-endorsed races. Since there are 4 percent more Republicans than Democrats in the state (as well as in Maricopa County), and most of the Republicans were easily beating their Democratic opponents in mainstream polls, data analysts are looking closely at the numbers. Analytics 805 examined the numbers of who voted in most of the races, and discovered that Republican candidates outside of the four races performed incredibly well in contrast, as much as 30 percent better.

Analytics 805 founder Thomas Cole told The Arizona Sun Times, “We took the Arizona election numbers and made this chart, to visually show the improbability of Kari Lake losing, while the entire state of Arizona voted Republican for the State Senate and U.S. House races. We saw 14 percent more support for Republicans than Democrats  in the State Senate races. So it makes no sense to think those Republicans suddenly flipped to Democrat Katie Hobbs for governor by this large of a margin.”

Cole said he became interested in the data after watching an episode of Joe Oltmann’s Conservative Daily Podcast, where Oltmann crunched the numbers. 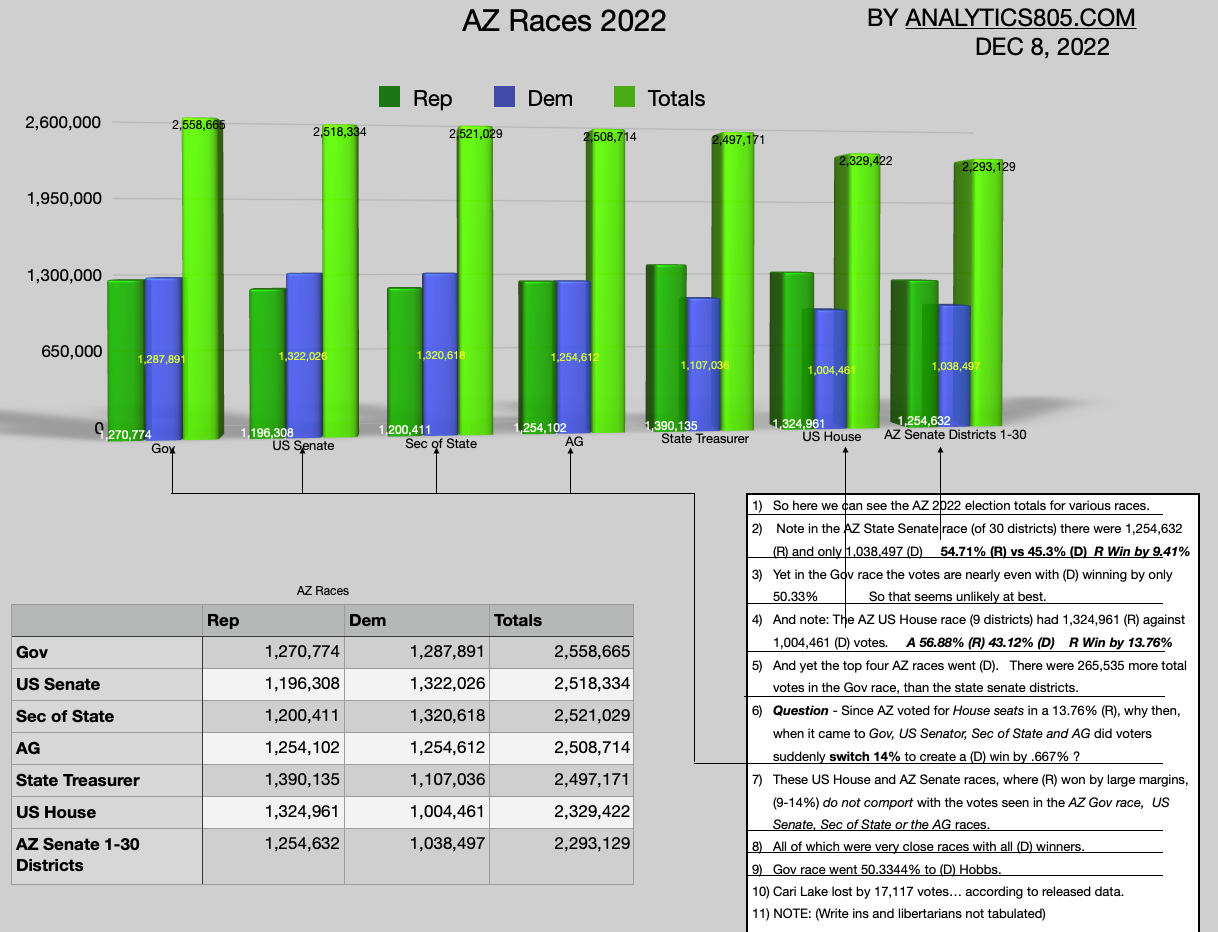 In contrast, Republicans won hugely in other Arizona races. Incumbent State Treasurer Kimberly Yee, a Republican who was not endorsed by Donald Trump and who ran a relatively low-profile office, received about 283,000 more votes than her challenger, 1,390,135 to 1,107,036, which is a significant 11 percent difference.

“Does anyone really believe that voters preferred GOP State Senate candidates with a 14 percent advantage, yet swung back dramatically to favor Democrats by up to 5 percent margins in four other races?” Cole said. “It defies the odds. I can understand a few percentage points difference, but around one-third of voters voting Democrat in some races but Republican in others makes no sense, the margins are too grossly different.”

Mainstream polls prior to the election showed three of the four Trump-endorsed candidates with solid leads over their opponents. Data for Progress showed Lake up four points over Democrat Katie Hobbs. One of the few polls in the Secretary of State’s race, CNN, showed Republican Mark Finchem four points ahead of Democrat Adrian Fontes, and a Highground poll showed Republican Abe Hamadeh leading Democrat Kris Mayes by five points. The U.S. Senate race was closer, with Data for Progress showing Republican Blake Masters trailing Democrat incumbent Sen. Mark Kelly by 1 point.The top left-wing journalists in Arizona were bracing for Democrat losses. Arizona Republic columnist Laurie Roberts, who steadily insisted Hobbs was going to win throughout much of the race, changed her mind in September, hinting that Hobbs might lose because she refused to debate Lake and had less charisma. Roberts declared in an October op-ed, “Democrats in Arizona are known for snatching defeat from the jaws of victory, but Katie Hobbs’ refusal to debate Kari Lake represents a new level of political malpractice.” She concluded, “Hobbs isn’t just letting down Democrats; she may well be letting down Arizona.”

Similarly, Arizona Republic columnist E.J. Montini predicted in September, “I do believe, however, that refusing to participate in a debate can – and will – cost Democrat Katie Hobbs votes in her campaign to become Arizona’s governor.”

The Trump-endorsed candidates believe there was voter disenfranchisement and suppression in the election, since over 70 of the vote centers on Election Day, which were almost all in heavily Republican areas, experienced technical problems resulting in long lines and voters leaving sometimes without even trying to cast a problematic ballot in “Door 3.”

REMEMBER: 72%+ of the votes on Election Day in person were Republican.

When you have 30% of the tabulating machines failing, causing people to leave the lines and give up.

This is voter suppression targeting a political party.

Both Lake and Hamadeh have filed lawsuits over the election problems, with the heavy-hitter lawsuits planned for Dec. 10 or shortly thereafter.

Rachel Alexander is a reporter at The Arizona Sun Times and The Star News Network. Follow Rachel on Twitter. Email tips to [email protected]
Photo “People Voting” by Phil Roeder. CC BY 2.0.

Editor’s note: This article has been updated to reflect corrections to a programming error.