The Trump-endorsed slate of candidates in Arizona’s top races who officials say lost their races have started pursuing legal challenges over what they believe was an election rampant with voter disenfranchisement and suppression.

One of the first challenges was turned away on Tuesday as premature, a lawsuit by attorney general candidate Abe Hamadeh and the Republican National Committee (RNC), but election law attorneys say this should not be taken as a sign that there are no valid grounds to overturn the election.

Bob Brickman, an election and regulatory attorney in Phoenix, told The Arizona Sun Times while he “understands the strategy of suing now, since fraud really should be challengeable any time, it’s the Arizona Legislature’s failure to reconcile statutory election conflicts created by the Secretary of State (for example, in the 2019 Election Manual) and Maricopa County Recorder/Maricopa County Supervisors’ non-statutory changes in election rules and procedures, that’s responsible for many of the challenges that judges refuse to wade into. That’s why judges have defaulted to existing statutes for refuge, including that election challenges cannot be brought until five days after the state has certified the results, which is scheduled for December 5.”

Another election attorney told The Sun Times, “Unfortunately the mainstream media is going to run with the story that this first negative judicial decision means the candidates don’t have a strong case, they won’t bother explaining to the public that there was very little chance these premature lawsuits were going to get anywhere. We’re not going to see any real meaningful cases until after certification.”

A.R.S. 16-673(A) states, in part, “The elector contesting a state election shall, within five days after completion of the canvass of the election and declaration of the result thereof by the secretary of state or by the governor.”

Maricopa County Superior Court Judge Randall Warner, a longtime Democrat, appointed to the bench by Democratic Gov. Janet Napolitano, stated that a special action, which is what Hamadeh brought, is only available as a remedy if there is no statutory remedy available.

“Here the election contest statute provides the remedy and process for challenging an election,” he wrote in a minute entry.

Hamadeh’s lawsuit cited “errors and inaccuracies,” improperly adjudicated ballots, printer mishaps, incorrectly duplicated ballots, and illegally accepted affidavit signatures. He trails his Democratic rival by just 510 votes out of more than 2.5 million ballots ahead of an automatic recount. His spokesperson said he intends to refile the lawsuit after certification.

Lake also recently filed a special action against Maricopa County demanding records, which may be dismissed for the same reason. 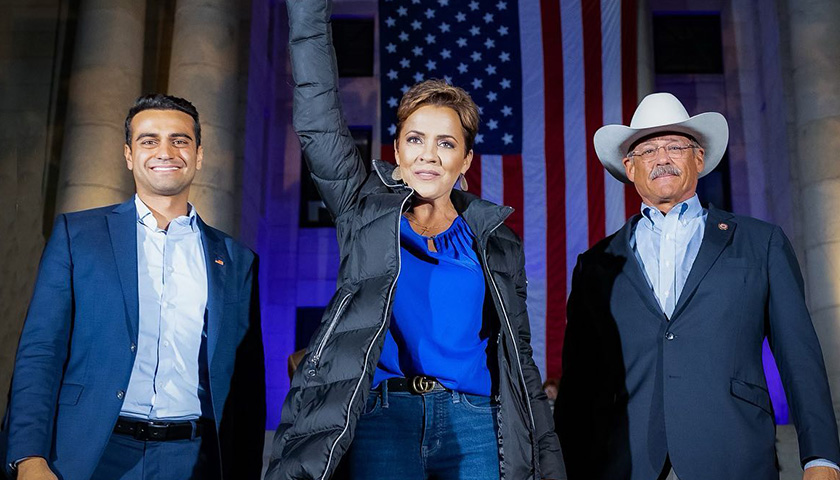 In an unrelated case filed before the election, a judge sanctioned Lake’s lawyers, who include Alan Dershowitz, for filing a “frivolous” lawsuit.

The case had nothing to do with the election results; it was from a previous lawsuit filed by Lake and Secretary of State candidate Mark Finchem asking to stop using electronic voting machine tabulators. Maricopa County Supervisors had asked for the sanctions, represented by Maricopa County Attorney Rachel Mitchell.

Federal District Court Judge John Tuchi made it clear he was issuing the sanctions as a deterrent to anyone attempting to bring a similar case.

“Imposing sanctions in this case is not to ignore the importance of putting in place procedures to ensure that our elections are secure and reliable,” he wrote. “It is to make clear that the Court will not condone litigants ignoring the steps that Arizona has already taken toward this end and furthering false narratives that baselessly undermine public trust at a time of increasing disinformation about, and distrust in, the democratic process. It is to send a message to those who might file similarly baseless suits in the future.”

An election attorney told The Sun Times that this individual believes the sanctions were deliberately issued now to pile onto the impression that the lawsuits over the election weren’t going well. They also wondered how a judge can decide that a lawsuit is frivolous if he hasn’t bothered to hear the case yet.

Tuchi, appointed to the bench by President Barack Obama, has a history of antagonism against conservatives. He investigated former Maricopa County Attorney Andrew Thomas several years ago over Thomas’s efforts to prosecute Maricopa County Supervisors.

Due to disagreements about legal strategies, including the lesser likelihood of pre-certification lawsuits going anywhere, the candidates are taking different approaches. Finchem tweeted that he would be challenging the results without the help of the RNC.

The RNC abandoned Arizona. But we don't need them. We are going to take up the fight ourselves. Dismissed!

Lake retweeted Finchem listing off the problems in the election, where he ended the tweet, “We must bring these crooks to justice.”

We must bring these crooks to justice

Arizona law allows any state voter to contest the election of a statewide office for several reasons. Those include that the winner did not receive enough votes, there were illegal votes, misconduct by election boards, or bribes provided to certain election officials.

5 Thoughts to “Candidates Hopeful for Election Challenges After Certification, Since Early Lawsuits Had Less Statutory Backing”