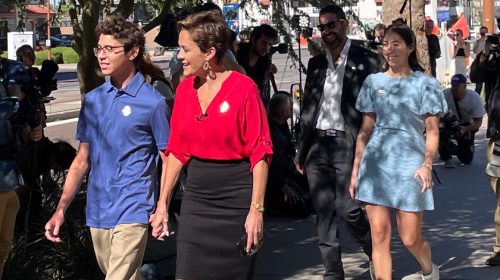 “They’ve got to fix this problem. This is incompetency. I hope it’s no malice and we’re [Lake’s team] going to fix it. We’re going to win,” Lake said.

Lake pointed to this issue as another reason Arizona needs election reforms. Throughout her campaign, Lake has said she wants to see Arizona’s elections carried out seamlessly, transparently, and free from any issues.

Lake said she woke up this morning to a buzzing phone of people concerned about how they would vote. In response, Lake reassured people to stay put and not to leave their voting site without casting a ballot. She said the three best things for people to do would be to ask to use the onsite handicapped voting machine if available, push through and wait until the tabulation machines are working, or place the ballot in “box three” if waiting is not an option.

During the hectic morning, Maricopa County Board of Supervisors Chairman Bill Gates and County Recorder Stephen Richer held an emergency press conference to explain what voters should do. They said they are trying to fix the problem as fast as possible, but people could use box three. This box, which is part of the tabulation machine, is a failsafe in case the tabulation machine malfunctions. Ballots placed in the box will allegedly stay there until polling closes when a bipartisan team will collect them and take them to the central tabulation center where they will be counted. Richer said this process is similar to casting early ballots, which are counted at the same location.

Here is a message from Chairman Bill Gates and Recorder Stephen Richer with an update for @maricopacounty voters on Elections Day. pic.twitter.com/OkQczCklGb 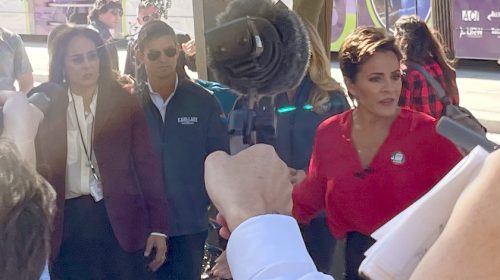 Appearing alongside Lake in Phoenix was Harmeet Dhillon, an experienced attorney Lake brought onto her team to handle any legal actions needed on Election Day. She agreed with Lake that people should try and tough it out at the polling sites and hoped that everyone would be able to cast their vote when polls close at seven pm. When asked if she supported extending voting hours to accommodate the tabulation issue, she said it would be best for people to do everything they can to vote before time runs out.

Dhillon suggested people use the polling location website from Maricopa County, which displays current wait times. For anyone who has not voted yet, she said wait times should indicate which locations are having issues and which are not.

Having an issue at the polls? You're not alone, and our office wants to track any problems you may be having at your voting site. Please file a complaint with our Election Integrity Unit here: https://t.co/e9rFhbiiEN. pic.twitter.com/PNjk3mH4Pp

Lake’s Democrat opponent, Katie Hobbs, currently serves as Arizona’s Secretary of State. She has refused to recuse herself from supervising today’s election, despite GOP claims that it is a conflict of interest for her to run as a candidate and supervise the election.

Neil Jones is a reporter for The Arizona Sun Times and The Star News Network. Follow Neil on Twitter. Email tips to [email protected].