SCOTTSDALE, Arizona – Speaking to a packed crowd of several hundred at the headquarters of ammunition company Dillon Precision on Wednesday, Kari Lake received loud cheers when she announced, “I will declare an invasion on the border on day one when I get into office.” She added, “I want us to be known as The Grand Canyon State, not the fentanyl cartel state.”

Lake made the announcement at a rally featuring fellow Republican, Virginia Governor Glenn Youngkin, who returned to the key battleground to stump for Lake at the Scottsdale rally.

The day before, newly-declared independent Tulsi Gabbard showed up to support Lake in Chandler. During his speech, Youngkin compared the transformation of his state switching to Republican control to Lake defeating her Democratic opponent Katie Hobbs. 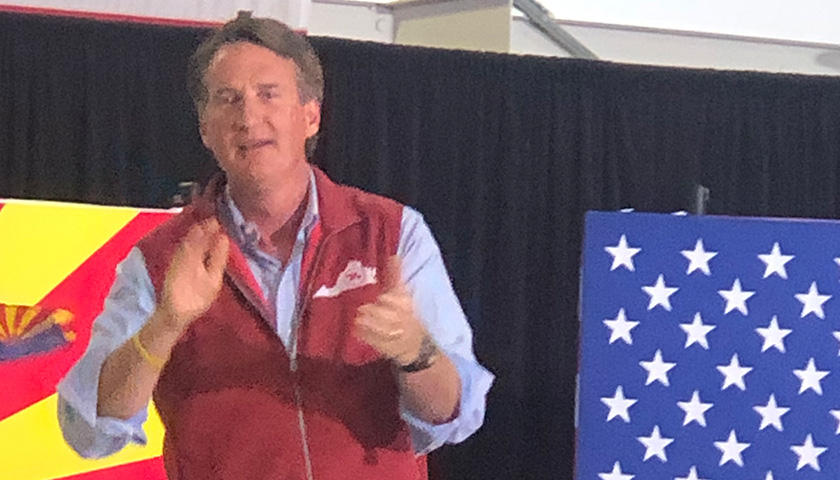 Both Lake and Youngkin spoke with no notes or teleprompter. They focused on the absence of Hobbs on the campaign trail, and her repeated refusals to debate Lake. Lake observed, “I think we’ve done more events today than Hobbs has done the entirety of the campaign.”

The mainstream media has published numerous articles lately expressing concern that Hobbs’ low-key attitude toward campaigning will cost her the race. Laurie Roberts, a left-leaning opinion columnist for The Arizona Republic, called Hobbs’ reticence “political malpractice” and said she is “letting down Democrats.”

Lake said, “If you don’t show up for the job interview, then you don’t get the job.” She wondered, “If she’s afraid of me, how is she going to go up against the cartels?” She said Sunday is the last chance for Hobbs to show up and engage in a debate. 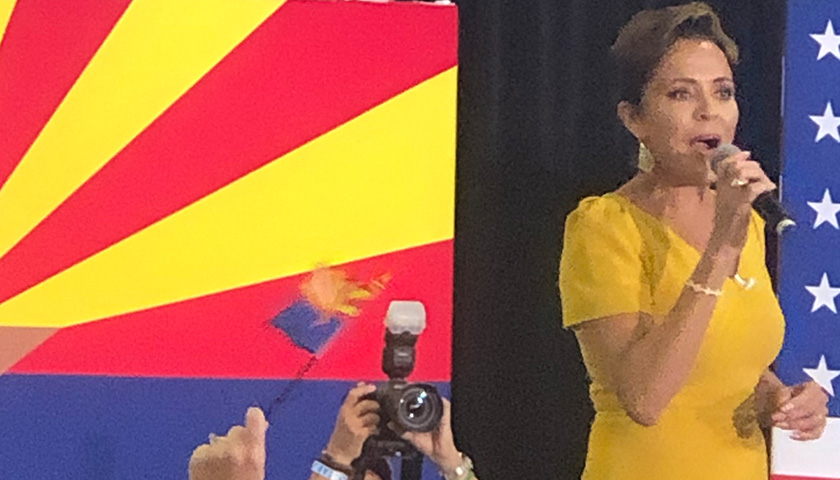 Lake talked specifically about Scottsdale, denouncing Scottsdale Unified School District for prioritizing a woke agenda over parental rights. She referenced a letter the National School Boards Association sent to President Joe Biden asking if schools could use the Gun-Free School Zones Act and the Patriot Act to crack down on parents upset over CRT and other issues – Lake said this essentially labeled them “domestic terrorists.”

She criticized the Centers for Disease Control for suggesting it would like to make the COVID-19 vaccine a required immunization for children. “Our children are not guinea pigs,” Lake said, declaring that the CDC are not going to force them to take “experimental shots.”

Lake brought up homelessness, a key issue she’s championed with an original plan. She lamented how people can no longer take their children to enjoy parks, since they’ve been “overrun by homeless. God didn’t intend for people to live with needles in their arms.”

Lake discussed the need to raise support from Democrats and independents. She said the #Walkaway movement has turned into “sprint away with your life.” She said, “Democrats don’t want forced shots either – well, maybe Katie Hobbs does.”

Lake got in a jab at Democrats who claim that she is going to destroy “our democracy,” referring to the country as a republic instead. She quoted Benjamin Franklin’s response to a question about what form of government the U.S. has. “We have a republic, if you can keep it,” she said. 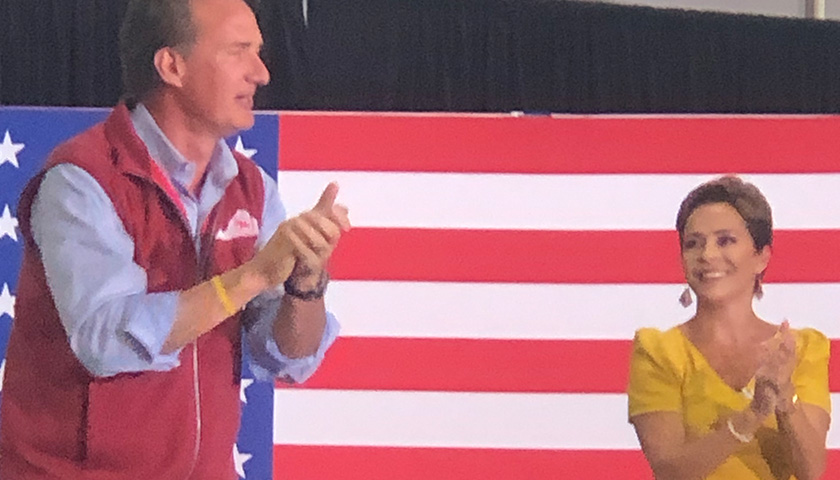 Youngkin had the crowd roaring with laughter when he described his humble beginnings, comparing them to Lake’s similar frugal upbringing. “My first job was taking out the trash,” he said. “There’s a lot of trash that needs to be taken out.”

The Virginia governor spoke about how the Democrats are trying to change “the home of” the founding fathers “and turn it into California.” He said Hobbs supports raising taxes, defunding the police, and opening the border. Youngkin slammed Hobbs’ refusal to debate. “Katie Hobbs doesn’t want to debate since she’d lose.”

Youngkin declared, “You need a fighter and you got one.” He called Hobbs and Biden “agents of chaos,” and said “everything they do makes things worse.” He cited how bad “runaway crime” has become, due to “protect[ing] the criminals that are doing the looting.”

He addressed education, saying, “They want to empower teachers’ unions. We will empower parents.” He added, “Do you want the schools to teach your children what to think instead of how to think?”

The crowd cheered wildly as Youngkin declared, “The government doesn’t give us rights, our rights are given to us by an almighty God.” He alluded to Dillon Precision hosting the event, “We are the party of American-made products.”

Youngkin ended the rally, saying, “We are the party that knows that parents matter. Your future is one you choose as opposed to government telling you.”

Rachel Alexander is a reporter at The Arizona Sun Times and The Star News Network. Follow Rachel on Twitter. Email tips to [email protected].