PHOENIX, Arizona – Arizona’s Republican gubernatorial nominee Kari Lake spoke to a passionate crowd on Wednesday at the Hispanic Townhall Election Event about issues that matter to the community.

Throughout her time speaking, Lake touched on many issues, including border security, education, inflation, homelessness, individual liberties, and abortion. However, she did all this alone, as her Democrat opponent, Katie Hobbs, declined the invitation to attend the event, leaving an empty podium next to Lake on the stage. 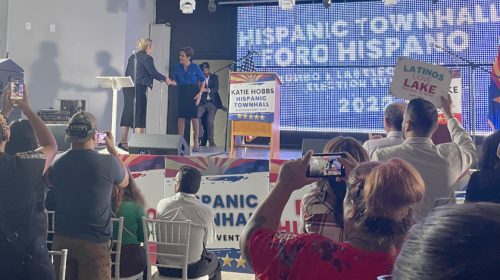 One of the most significant issues plaguing the state of Arizona is the unchecked illegal immigration, crime, drugs, and human trafficking occurring along the southern border, which Lake said requires aggressive action to combat.

“So, we don’t have a choice right now but to secure that border, and that’s why I’m going to take very bold and aggressive action on the border,” said Lake. “So, we’re going to make sure on day one, we call it what it is, which is an invasion by these cartels, and were going to put the national guard down there to stop these drugs from coming across.”

One specific issue Lake focused on was fentanyl, which she said poses a major threat to America’s future generations. She said her actions would work to ensure Arizona is not the pipeline for this dangerous substance entering the country.

One attendee asked Lake what she plans to do regarding asylum seekers, to which she said her priority would be the people of Arizona.

“While I wish we could solve all the world’s problems, we cannot afford, as Arizonans, to have 5,000,000 people come across. We just can’t afford it.”

Another way Lake said she hopes to positively impact the Hispanic community is through education, specifically through dual-track education.

“With the economy being the way it is, I talk to industry leaders, and I have for the past year, plus, and they say, ‘Kari, we have really good jobs.’ These are jobs that pay well. They give you a salary and benefits that can help you raise a family, but we don’t have the qualified people,” said Lake.

Her ideal program would have students in the tenth grade begin learning trade skills and vocational training so they can leave school prepared for jobs in the real world.

Lake also shared her support for the recently passed universal Empowerment Scholarship Account law, saying she would absolutely have signed the law herself if she were governor.

“We need to bring back safety. That’s why I have a plan to battle chronic street homelessness, make sure that we can restore the quality of life for the hard-working people of Arizona,” said Lake.

Lake scolded Hobbs for not attending the event to show the community that she is fit to lead the state.

“I really wish my opponent was here. These are important questions, and I’m happy to answer them. I don’t know what the next question’s going to be, but if you can’t stand on this stage and answer questions, whether they be tough questions or easy questions, I don’t know how you can lead this big state. I really don’t.”

Neil Jones is a reporter for The Arizona Sun Times and The Star News Network. Follow Neil on Twitter. Email tips to [email protected].