The debate got quite heated at times, with the candidates calling each other out and the audience often wildly cheering or loudly booing – despite organizers requesting decorum. Lamon and Masters, the candidates with the most money in the race, have been running TV ads attacking each other the last few weeks, and those attacks played out throughout the evening. 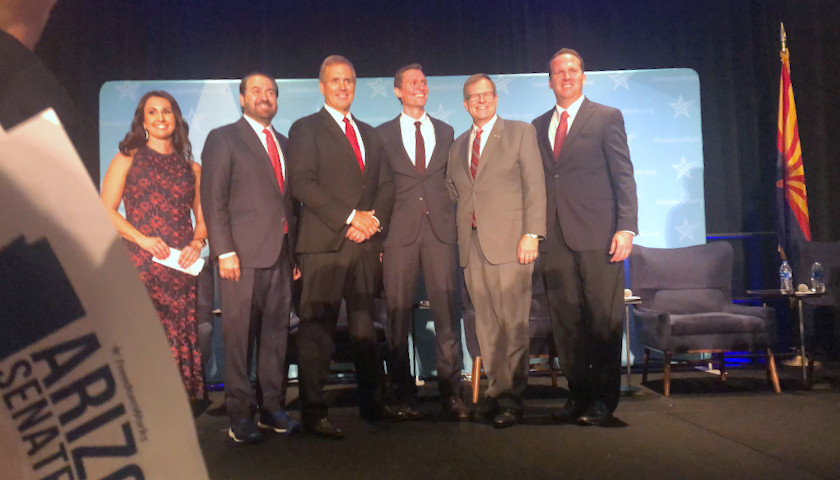 The candidates laid out their qualifications and achievements during opening statements. Brnovich pointed to his Supreme Court victory in Brnovich v. DNC, fending off a Democrat challenge to Arizona’s laws against ballot harvesting and out-of-precinct voting when Arizona Secretary of State Katie Hobbs refused to. He cited many of his lawsuits against Democrats, including being the first person in the country to sue the Biden administration over COVID-19 vaccine mandates.

Lamon emphasized his unanimous endorsements from the National Border Patrol Council and the Arizona Police Association. Masters said he would start an America First caucus in the Senate and took a potshot at “weak establishment candidates.”

McGuire said his priorities are “faith, family, and duty,” and relayed how he resigned his position as head of the National Guard in Arizona instead of complying with the Biden administration’s executive order to send troops to Washington D.C. for the Jan. 6 protest.

Meanwhile, Olson said he was the only candidate with a “proven conservative record,” citing his years serving in the Arizona Legislature where he fought COVID-19 vaccine mandates.

The first question the candidates were asked was how they would handle the surge of illegal immigration on the border. Olson said his first priority as senator would be to introduce a border security bill, finish building the wall, and make e-Verify mandatory for all employers. McGuire said he’d sent National Guard troops to the border four times already, would build a wall, and reactivate the helicopters that President Barack Obama had deactivated.

Masters said what Biden has done on the border is “criminal;” he is “a criminal who needs to be impeached.” He said the correct amount of people coming over the border is zero.

Lamon pointed out that the Border Patrol Council didn’t endorse Brnovich, and they listed Masters last in their ranking of the candidates – alluding to his campaign ads where he attacks Masters for previously supporting open borders. 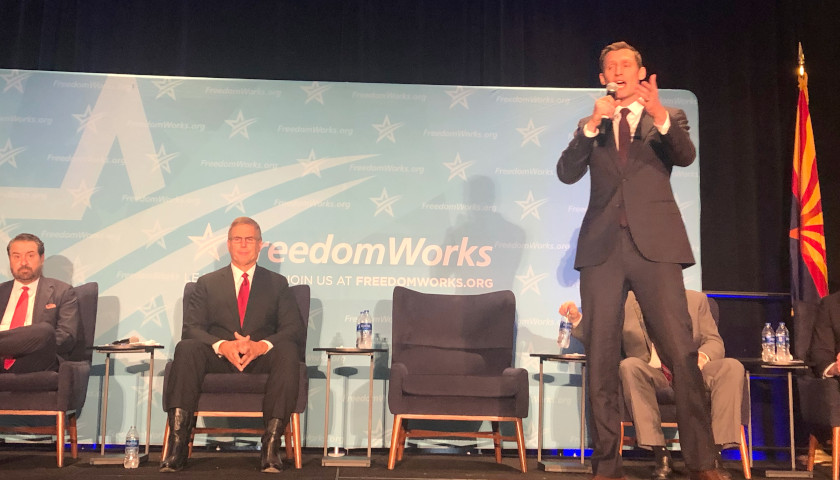 Brnovich said some of the other candidates are just talkers who haven’t done anything unlike him, a theme he would repeat throughout the evening. He said he sued the Biden administration over the wall; he didn’t just talk tough. “Not one person on this stage was with me.” He also referenced his successful lawsuit stopping in-state tuition for illegal immigrants and lawsuits over other benefits for illegal immigrants.

Next, the candidates were asked what they would do about Medicare and Social Security running out of money. Brnovich said the “deadbeats and cheats” who are ripping off those programs need to be prosecuted, and would trim entitlements and eliminate the federal Department of Education.

Lamon said it’s necessary to stop the payments to illegal immigrants; and Masters said it’s time to get someone younger like himself in office, and said he would privatize Social Security.

McGuire vowed he would cut agencies by 10 percent, pointing out that since they’ve been operating virtually during COVID-19, so they can make “people virtually unnecessary.”

Olson pointed to his record in the legislature, and said he was the only one who has balanced a budget.

The third question was whether to have free trade with China and how to hold it accountable.

Olson went after every other candidate. He said Lamon partnered with Chinese-controlled solar companies. He attacked McGuire for doing nothing under Gov. Doug Ducey when Ducey locked down businesses. He said Brnovich didn’t do enough on election integrity, and he said Masters got a $13.5 million gift from a Facebook board member, alluding to Masters’ colleague Peter Thiel who recently resigned from the board.

McGuire responded by telling Olson he doesn’t know how the military operates if he thinks he can take on the governor wearing a military uniform, which received wild clapping. Masters defended his Thiel connection by saying Thiel will be needed to take on incumbent Democratic Sen. Mark Kelly and the “criminally negligent” Biden.

Lamon said “Arizona is the mother lode of mining,” something that needs to be expanded. Brnovich said “it’s not about free trade, it’s about fair trade,” and the Chinese are sending chemicals to Mexico which then get made into fentanyl, “killing our kids.” 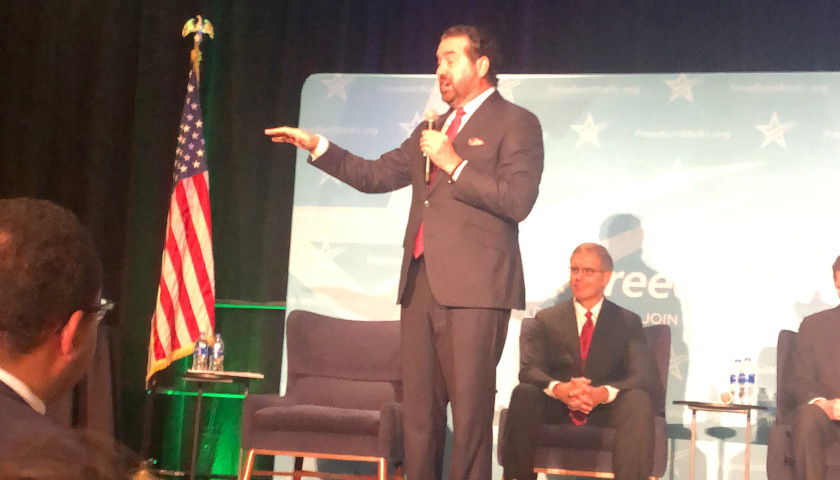 The candidates were next asked whether the federal government should have a role in stopping tech censorship. Brnovich said he was the first Attorney General to sue Google in state court, and warned about letting government get into the business of stopping censorship. He supports eliminating Section 230 immunity from lawsuits for big tech.

Lamon went after Masters’ ties to Silicon Valley, stating he’s spending $13 million to buy a Senate seat from California. He attacked the Club for Growth’s endorsement of Masters, calling the organization “the worst swamp creatures” who support “open borders” and “pro-China.” He continued his criticism, “The last thing we need to take on big tech is someone from big tech.”

Masters said it should be illegal to kick Trump off Twitter, and criticized the social media giant for kicking off his friend Rep. Marjorie Taylor Green – who endorsed him. McGuire said there should be a digital bill of rights to protect personal information. Olson reiterated his substantial record in the legislature.

The fifth question asked of the candidates was whether election integrity should be handled federally or on the state and local levels. Olson focused on ballot drop boxes, noting that Dinesh D’Souza’s 2,000 Mules documentary found evidence of drop box fraud in Maricopa County. McGuire said he believes there was military ballot fraud in Arizona, since there was a 68 percent increase in ballots sent through email from troops overseas but fewer troops were overseas.

Masters said ID should be required to vote, and proof of citizenship in order to register to vote. Someone in the audience loudly yelled, “You weren’t even registered two years ago!” Lamon said that since he is the largest contributor to Republicans in the state, he got to be one of the electors for Trump.

Brnovich went off on his opponents. He said the reason why states can enact election integrity laws is because he fought and won Brnovich v. DNC. “Not one single person on this stage was there with us.” He explained some of the legal steps he’s taken and took a shot at Masters, “We’re gonna have someone who can stand up to Kelly and the Democratic machine and not just regurgitate talking points. A California lawyer should know that.”

The candidates were asked what they would do about the DACA recipients, the illegal immigrants who were brought to this country when they were under age 18, but whose temporary legal status could end. McGuire said he would give them 180 days to self-report, and after that if they didn’t he would deport them.

Olson said he would deport them, but Masters responded and said he didn’t believe Olson actually would.

Notably, Masters said he would only deport criminals.

Some of the issues the candidates were generally in agreement on were eliminating the Import-Export Bank, reducing the aid to Ukraine, replacing Mitch McConnell as the Republican Senate leader, and banning insider trading by members of Congress.

There are no further debates scheduled among all the candidates at this juncture. The primary election is August 2.

Rachel Alexander is a reporter at The Arizona Sun Times and The Star News Network. Follow Rachel on Twitter. Email tips to [email protected]