The grassroots patriotic group America Pack put on a debate for the Republican primary candidates for Arizona attorney general (AG) Friday night, and of the five candidates who participated, none of them came across as moderates, to the pleasant surprise of the audience. The main issue championed by the five was border security, with election integrity a close second.

Their agendas mainly mirrored that of current AG Mark Brnovich, who is now running for U.S. Senate. Brnovich has been one of the most proactive AGs in the country pushing back on the Biden administration, filing tens of lawsuits over election integrity, border security, and other areas of overreach or inaction. Endorsed by both Mark Levin and Sean Hannity, the candidates sounded like they were trying to out-conservative him. 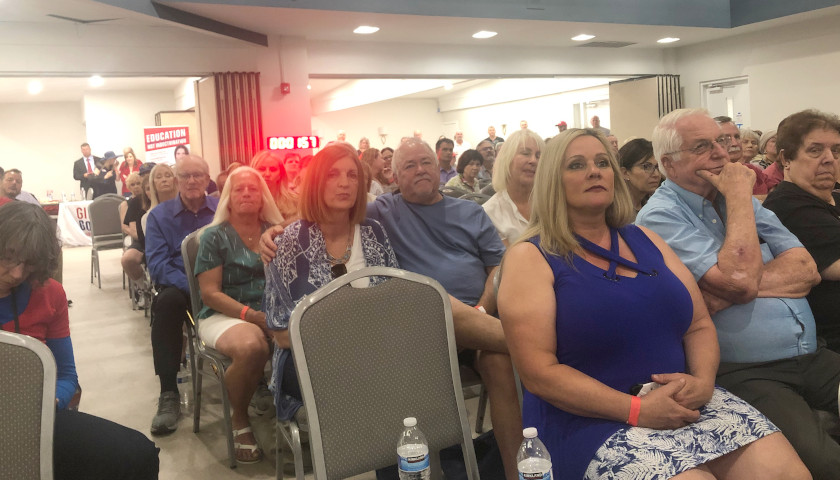 Moderated by longtime radio talk show host Mike Broomhead, the forum was just as raucous as the Republican gubernatorial primary debate last month. Broomhead first asked the candidates what their priorities would be in the first 90 days if elected AG. Lacy Cooper, who self-identified as the border security candidate due to her background prosecuting border-related crime, said she would beef up drug enforcement, utilize wiretapping to go after cartels, and ask the Arizona Legislature to give the AG power to enforce all felonies, since there are some county attorneys who won’t prosecute some crimes such as certain abortion laws. Rodney Glassman, an Air Force prosecutor who also works at Beus Gilbert and used to be a Democrat until Donald Trump decided to run for president, said he would review every executive order issued by the Biden administration and file lawsuits over any federal overreach.

Andrew Gould, who served on the Arizona Supreme Court and said he used to live on the border and prosecute the cartels, said he would establish a no trespassing zone on the border. Abraham Hamadeh, an intelligence officer in the Army Reserve and former Maricopa County prosecutor, said he would go after election fraud in the 2020 election, pointing out how it’s sad that we have to rely on filmmaker Dinesh D’Souza to expose significant election fraud. If elected, he would request all of D’Souza’s videos. He also emphasized border security, saying the states have the sovereign power to deal with that crime.

Tiffany Shedd said due to living along with one of the hottest smuggling routes in the state, border security would also be a priority of hers, and she would declare war on the cartels. As a water rights attorney, she would fight back against federal encroachment in that area, and she also said regardless of how the leaked opinion on Roe v. Wade from the Supreme Court turns out, she would enforce abortion laws.

Next, the candidates were asked what their greatest strength was. Glassman discussed his prosecution experience and managing a large law office. Gould accused Glassman of not supervising any attorneys, and touted his own experience as a border prosecutor and then serving on the Arizona Court of Appeals and Arizona Supreme Court.

“This isn’t going to be learning on the job for me,” he declared. Glassman shot back and said if you asked a candidate who their last three clients were, would you want someone who worked for government for 30 years?

Hamadeh, who has the least legal experience of the group, two and a half years, said, “I will trade decades of experience for one ounce of courage,” and the crowd roared. He defended his young age, 31, by pointing out that the judge who struck down a mask mandate was 35. He pointed out how Dr. Anthony Fauci had the most health experience, Joe Biden had the most government experience, and Hillary Clinton used Trump’s inexperience in office against him. He cited his previous prosecutorial experience and said, “We need a soldier in office.” He relayed that left-wing billionaire George Soros has called him a “dangerous candidate.” 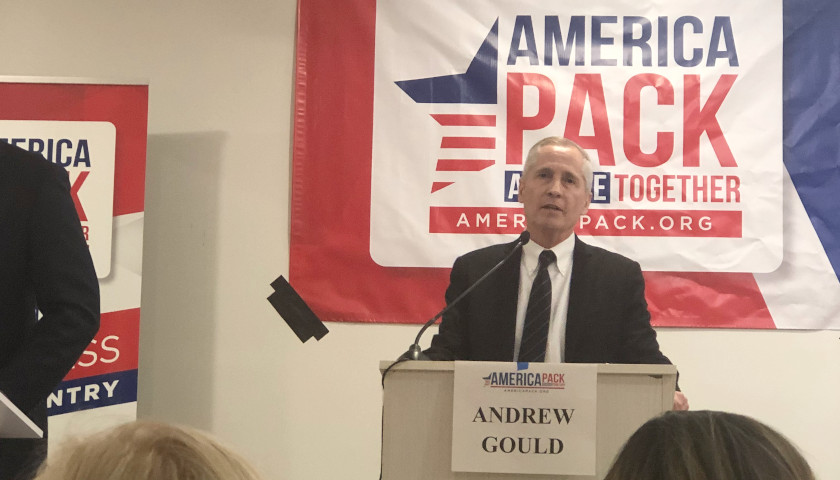 Shedd toned down the room by saying, “Everyone up here is legally qualified for this office.” She has been a water and business attorney since 1994. Besides dealing with border crime every day, she’s on the frontline fighting for parental rights as a homeschooling parent. She saw election fraud in Apache County and lost 40 acres of farmland from state administrative overreach.

Cooper discussed her position as border security chief for the U.S. Attorney’s Office in Phoenix under Trump. She distinguished herself from Gould by pointing out she has recent border security prosecutor experience, just a year ago. She said she would work to get Congress to change the laws so illegal immigrants can’t cross the border and claim asylum, and would make it mandatory to follow Trump’s policies on the border.

The candidates were asked about the most significant cases they prosecuted, which didn’t apply very well to some of them. Shedd, who doesn’t have much courtroom experience having practiced water law for her career, pointed out that 80% of the AG’s office is civil law, not prosecution. Cooper said she didn’t think two and a half years is enough experience, alluding to Hamadeh.

Next, the candidates were asked what they would do regarding the border besides suing the Biden administration. Hamadeh said he agrees with current Attorney General Mark Brnovich finding there has been an invasion on the border. He would open up offices along the border and work with the county attorneys there. Shedd said the cartels should be declared terrorist organizations. If cities and counties don’t enforce the new state human smuggling law, she would remove their state revenues. Cooper said she would go after the cartels regardless of whether they’ve been designated terrorist organizations or not.

Glassman lamented how even though the laws haven’t changed since the late 2000s, the Biden administration provides hotels in Scottsdale for illegal immigrants. He said he has been endorsed by every law enforcement agency in the state that has issued an endorsement in the race. Gould said it’s useless trying to get the federal government to do anything, he would focus on a no trespassing zone on the border and laid out specific penalties for illegal border crossers.

The fifth question directed to candidates asked what they would do to protect consumers from fraud. Shedd expressed concern that consumer fraud laws could be used to shut down businesses, she doesn’t want the AG’s office weaponized to go after business the way some prosecutors weaponize prosecution to go after gun manufacturers.

There were numerous barbs thrown, with Cooper pointing out that Glassman wasn’t “endorsed” by Senate President Karen Fann (R-Prescott) and House Majority Leader Ben Toma (R-Peoria), only supported by them, and Gould attacked Glassman for obtaining Planned Parenthood’s when he used to be a Democrat several years ago. Hamadeh cut through the tension, saying, “I may be the youngest but I feel like the most mature.” Gould retorted, “I know you’re sensitive but we gotta fight.”

Hamadeh credited Brnovich for taking on big business, including Volkswagen and Google. He said we could never have imagined needing to take on Disney now.

Broomhead asked the candidates how they would handle the post-Roe v. Wade era, considering the Democratic candidate for Maricopa County, Julie Gunnigle, has said she would not enforce very restrictive abortion laws. All five candidates denounced Gunnigle’s position, emphasizing that the Arizona Legislature needs to give them authority to prosecute all felonies. Shedd said a legislator should file a complaint with the AG’s office about any county attorney that does not prosecute abortion laws, and she would withhold state funding for their office. Both Gould and Shedd gave powerful Christian testimonies about abortion, and Hamadeh got into the political aspects, noting that even liberal Europe mostly bans abortions after 12 weeks of pregnancy.

A seventh question directed at the candidates asked how much money they would budget for election integrity and what they would do with it. Glassman responded, “Whatever it takes.” He slammed the election-fraud denier Maricopa County Recorder Stephen Richer, “The realtors’ association can tell you who moved or died, but Richer can’t.” Gould said he would form a rapid response unit, file a writ of mandamus and force Democratic Secretary of State Katie Hobbs to clean up the voter list, and prosecute drop box cases. 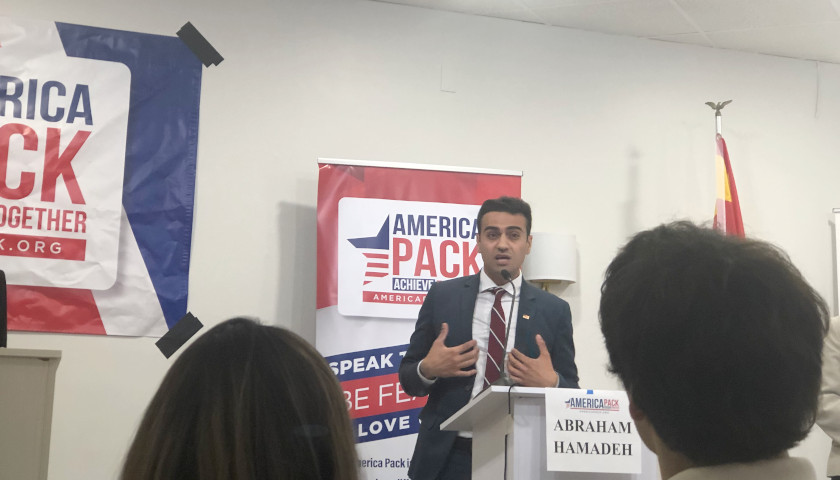 Hamadeh also said he would beef up the attorneys and investigators handling election fraud, and go after the Maricopa County Board of Supervisors “who think they’re above the law.” He added, “We’ve gotten too comfortable with mail-in ballots.”

Shedd referenced her previous run for Congress in Arizona, when everyone thought she’d won on election night, but she ended up losing and discovered there were more votes in red precincts than lived there. She said as AG, she would bring in pro bono attorneys to help with elections. “If you count counterfeit ballots 10 times, they’re still counterfeit ballots.”

The candidates were asked how they would rate Brnovich’s job as AG from 1 to 10, with 1 being worst, and all of the candidates rated him around middle or slightly above except Glassman. He said he would give him a zero, mainly citing COVID-19 restrictions and lockdowns. However, Brnovich did not support any of them and sued the Biden administration over various mandates, filed a brief challenging Gov. Doug Ducey over the lockdown on bars, and took on the City of Tucson over its vaccine mandate, among other actions.

Cooper praised some of Brnovich’s lawsuits. Shedd commended his successful lawsuit against Arizona’s public higher ed for giving in-state tuition to illegal immigrants and said he had a great record on the Second Amendment

For their closing statements, Lacy reminded the crowd that she was the border security candidate and a border security chief in the Trump administration. Glassman said he will protect Arizonans from overreach by all levels of government: “A government that is large enough to give you everything is large enough to take it all away.” Gould explained that he’s a “scrapper” who punches back twice as hard due to his background overcoming poverty, taking a subtle jab at Glassman’s wealthy background.

Hamadeh said his consultants have warned him not to run too far to the right, but pointed out how Florida Gov. Ron DeSantis has turned his state from purple to red. Finally, Shedd explained her toughness, citing her A rating from the NRA and how she’s taught 150 people how to shoot. She said someone called CPS on her for homeschooling, and said she has experience “facing the beast that is the federal government,” including the Bureau of Land Management and the Environmental Protection Agency.

Rachel Alexander is a reporter at The Arizona Sun Times and The Star News Network. Follow Rachel on Twitter. Email tips to [email protected].