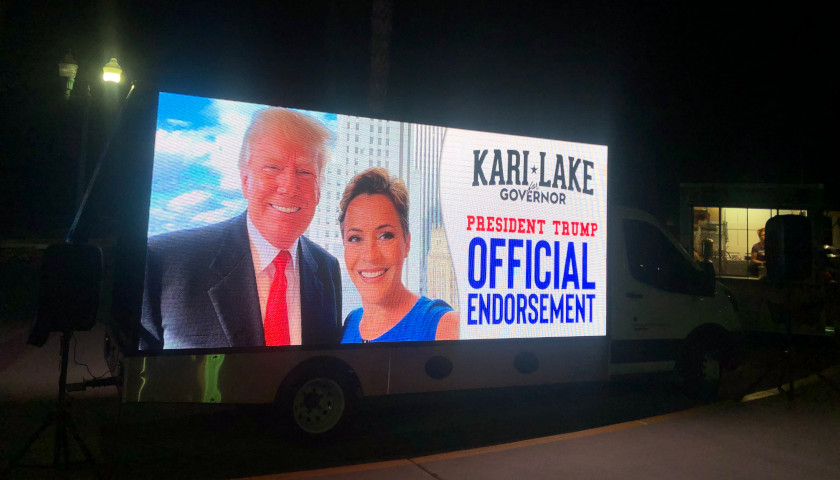 She played a clip of herself on air a year ago when she was an anchor at KSAZ-TV. Although she had not yet come out yet as a conservative, she visibly expressed her disappointment that the station had called Arizona for Joe Biden so early in the evening. One of her fellow broadcasters explained to her that KSAZ called it since Fox News had, but Lake responded and pointed out that the Associated Press had not called it yet. She told him that there is “distrust” when a station calls a race early and voters go to bed thinking one candidate had won but it turns out to be incorrect.

Lake declared, “COVID was used, we know, to steal an election.” She said Maricopa County “was the scene of the crime.” Lake thanked the grassroots volunteers who demanded to investigate the election results, and brought three of them up on stage: Shelby Bush, Steve Robinson, and Josh Barnett. Bush told how 75-100 protesters marched to Maricopa County Tabulation and Election Center (MCTEC), the building where Maricopa County Elections stores and tabulates ballots, with Rep. Paul Gosar (R-04-AZ), and the election officials refused to let Gosar in. 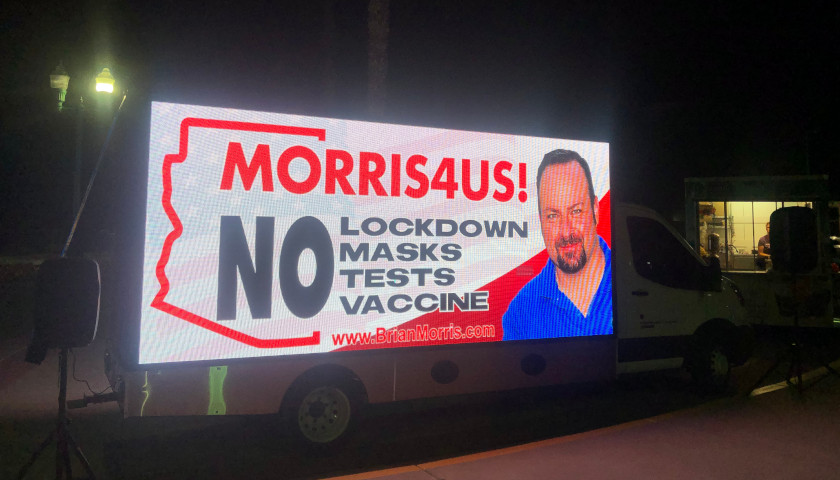 Barnett, who is running for Congress in Congressional District (CD) 6, said a legislator in Wisconsin is about to drop a bill on Thursday to decertify the results of the Wisconsin election due to fraud. Racine County Sheriff Christopher Schmaling wants charges brought against the Wisconsin Elections Commission over voter fraud in nursing homes.

Activist Liz Harris, who has been conducting her own independent investigation into voter fraud in Arizona by visiting over 11,000 voters, revealed her three key findings. First, “the voter registration rolls are messed up.” She discussed how voters she’s talked to received ballots even though they had not requested them and are not on the permanent early voter list, as well as receiving ballots for people who don’t live at their address. Some of those misaddressed people still voted in previous elections.

Second, there is a problem with data manipulation. Harris believes the Maricopa County Supervisors are deliberately not turning over the Splunk logs and routers because of what they will reveal. Third, mail-in ballots are being sent to dead people — including dead people who died before 2010. She recommended eliminating mail-in ballots except for people who really need it, shrinking precinct sizes, and requiring strong voter IDs, not just utility bills.

Rep. Wendy Rogers (R-Prescott), who has been one of the most outspoken Arizona legislators regarding election fraud, spoke about the video evidence of an election worker deleting hundreds of thousands of election files. “Criminals stole my vote,” she said. Rogers asked people to sign her petition to decertify the 2020 election, which has 1.2 million signatures. 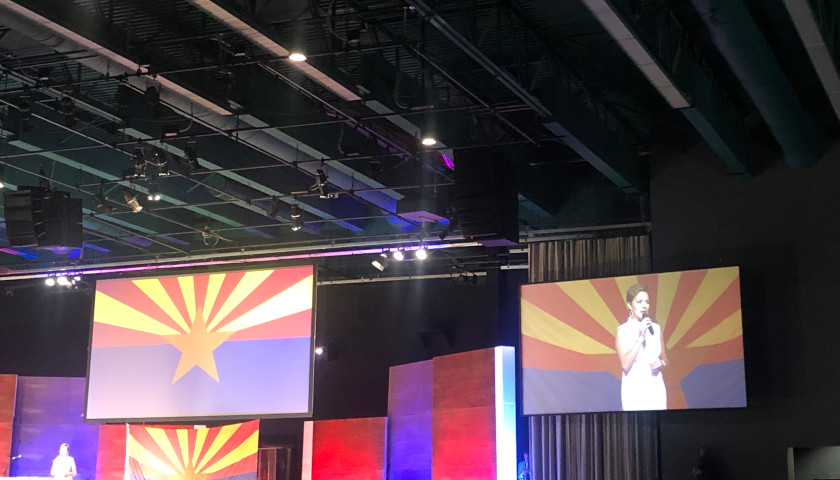 Rep. Sonny Borelli (R-Prescott) and Rep. Leo Biasiucci (R-Lake Havasu), who have been strong advocates of auditing the 2020 election, provided a video message where they gave President Joe Biden the “Italian salute,” which has the same meaning as giving the finger.

Lake honored the volunteers who worked observing the Maricopa County ballot audit, who sat in the front at the rally. Some of them were featured in a video, where they discussed how they saw large numbers of ballots for Biden but far fewer for Trump, and it didn’t make sense to them. They were concerned their observations did not make it into the final audit report.

Former Trump advisor Mike Lindell appeared on video to say that more litigation is coming regarding Arizona and voter fraud. He expressed his disgust for Ducey certifying the 2020 election, saying he texted him saying “lose my number” afterwards.

Trump himself provided a message with a strong endorsement of Lake. He thanked everyone who worked on the audit and took a jab at Ducey, “You have right now a governor who didn’t do the job. But he didn’t have a clue.” He went on, “We won Arizona by a lot, it was a fraudulent election and it was a corrupt election.”

Lake declared, “Welcome to the party of the Trump Republican Party!” She scowled, “These swamp creatures want the MAGA movement to go.”

Lake announced some of her endorsements, which include former Acting Director of National Intelligence under Trump, Ric Grenell. She also revealed a brand-new endorsement from conservative talk radio host Larry Elder. Her campaign has more volunteers than any other campaign in the country and more donors than any campaign in Arizona.

She ended the rally, “We’re not going to be controlled by the anti-American Marxist maniacs!” to roaring applause.

Rachel Alexander is a reporter at The Arizona Sun Times and The Star News Network. Follow Rachel on Twitter. Email tips to [email protected]