Ryan Curtis got his first guitar when he was in 7th grade. Even though he was raised with his parents’ classic rock albums like The Rolling Stones and The Animals, he turned to punk. As soon as he got his guitar, he immediately got a band together and started playing and writing songs. As he got into high school, roots music like Johnny Cash and Willie Nelson got sprinkled in.

He grew up in a small town in Northern Michigan and that upbringing would be the source of lyrics for many of the songs he would write.

“It was the 90s, pre-internet days, so me and my friends we would put on shows for our (other) friends. We weren’t part of a scene and were kind of on our own. That was my start into music,” Curtis states candidly.

He went to college for business and like so many independent artists, he has a day job that “pays the bills.” His job is flexible and allows for traveling and shows.

He confirms, “As far as my main passion, it has always been music.” 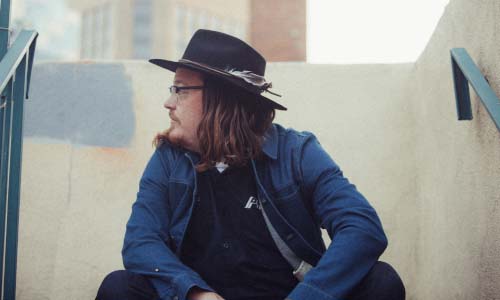 He wanted a band with a little more rock and roll so he started The Weary Times. The music was more roots-based rock and roll, while still maintaining the country vibe.

After the breakup of Curtis/Sutton & The Scavengers, the singer/songwriter wanted to continue that career and legacy that they had started so he decided to create an EP as a solo artist.

He admits, “Fans do come and go. Players come and go. So there is definitely an advantage to releasing music under a solo moniker.”

In the winter of 2020, Curtis went to Enterprise, Oregon’s OK Theater alone to record an EP’s worth of songs. The setting –a century-old theater on the edge of civilization proved fruitful. With the help of music engineer, Bart Budwig, and his talented backing band, Curtis tracked an EP’s worth of songs in one day. That night, Curtis noticed that the four songs he randomly picked for the EP had a common theme, a connection to the Midwest.

The musician still had quite a few unreleased songs in his catalog. Written over 12 years, when he saw a theme emerge, he decided to release a full-on record called the Rust Belt, Broken Heart. 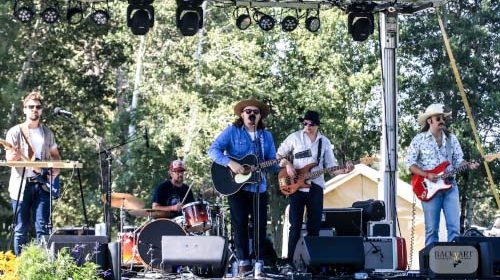 Saving Country Music states the album is “reminiscent of Tom Waits or maybe Ben Nichols in tone, but with his own take on raspy exacerbations about life’s trials and troubles, the 10 songs of Rust Belt Broken Heart come with that “lived it” feel that may not be pretty, but dammit it’s real.”

The title track “Rust Belt, Broken Heart” touches on many of the themes the album visits: the difference between being lonely and being alone in the expansive American Midwest, hard work, heavy drinking, and reaping what you’ve sown.

“The idea behind that song is that you can still be with people in a relationship, but it doesn’t mean you are fulfilled,” he explains.

Part of the charm of the record which is very evident in the debut single, “All Alone” is that it is not over-produced.

He expounds, “When we mixed the record, we went back and forth trying to try and capture a modern sound using vintage amplifiers and microphones that maybe would have sounded like it came out of the early 70s.”

With the over-production of songs on the radio being so glossy and perfect, “you can lose a lot of the human element, the soul,” the artist confirms.

The less serious “The Hide Away” is a little ragtime tune about drowning your sorrows at your favorite bar in old Chicago. It’s as good of a drinking song as any you would hear in the streets of Nashville on Broadway.

The song “Detroit Blues” is as fun of a song as you can have about losing a job and a lover.

His favorite song off the record would be “Pour Another Glass.” It’s a simple tune with just three chords written about a dejected couple. The first verse is written from the woman’s perspective while the second verse is from that of the husband. Go ahead and pour another glass / Tryin’ to wash it down, a rocky past/ Go and pour another glass / All the whiskey in the world ain’t gonna make it last. Between the lyrics and slide guitar, you could swear you are listening to a classic single straight from the Grand Ole Opry.

Even though Rust Belt, Broken Heart was just released, Curtis confesses that his next record is 70% done with 3rd on the heels of that one. During the pandemic, he was left with a lot of downtime for writing songs.

Some of Curtis’ songs are amusing while others are downright painful. But one thing you know after listening is that he understands the human condition and is talented enough to put those feelings into words. And even though he can’t solve your problems, it makes you feel better just knowing that he understands where you have been and what you are going through.