PHOENIX, Arizona – The Star News Network Wire Service – The energy of the thousands of attendees of former President Donald Trump’s rally on Saturday, hosted by Turning Point Action at the Phoenix Federal Theater, carried over to the constant stream of Republican politicians who appeared over the more than three hours of the event prior to the the former president taking the stage. 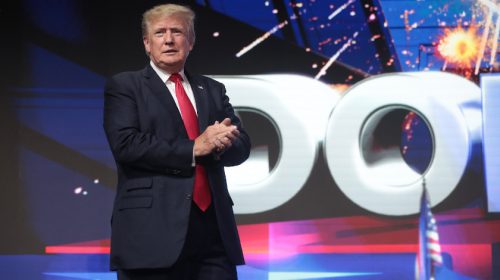 Trump took advantage of the “Protect Our Elections” theme to detail many of the November 2020 election irregularities in Arizona and other states, as well as to thank the “brave and unyielding warriors in the Arizona State Senate,” who initiated the forensic audit in Maricopa County.

He also recognized “every Arizona Republican that had the fortitude and backbone to defy the lying media,” when it came to the integrity of the election in the state.

Trump seemed to connect on a more emotional level, even as he held the attention of particularly enthusiastic and engaged supporters while he touched on innumerable topics woven into the overall theme of the results of the November 2020 election and the disastrous things that have since happened to the country.

From the loss of energy independence, to the soaring rates of deadly crime, the rapid onset of inflation, indoctrination of school children through critical race theory and the flow of illegal immigrants over the country’s southern border, China and the Wuhan virus, and the overall “woke” culture, Trump pointed to the devastating impact of Democrat policies. 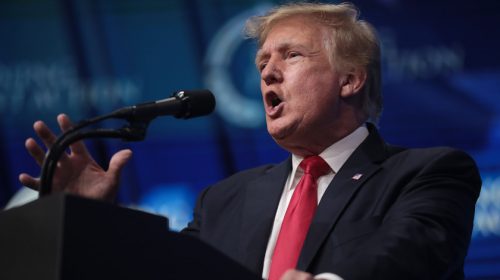 “They are coming after me because I will never stop fighting for you,” said Trump.

Trump focused on the achievements of his presidency and election integrity, as The Star News Network reported, as he spoke for for about an hour and forty-five minutes.

He encouraged, as he neared the end of his remarks, that the “Make America Great Again, Again” continues.

“So my fellow Americans, our movement is the greatest in American history.”

“The 2022 mid-terms are the next phase of the battle, and we will not stop there.”

Then, Trump wrapped up with his signature closing.

“And we will make America great again,” said Trump with his supporters in unison. 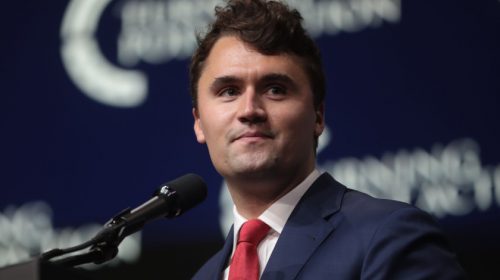 Charlie Kirk, Founder and President of Turning Point U.S.A and Action, told attendees the fire marshall said the venue was at its capacity of 5,000, while there were many more thousands still outside, a point also made by Trump.

The articulate Kirk credited President Trump for “changing the Republican party for the better.”

Kirk reviewed the many ways in which the Democrats and bureaucrats tried to thwart Trump because he represented an “existential threat to the American ruling class,” of which he used to be a part.

Kirk, who was married in the state and headquartered his organization 15 minutes down the road, was critical of Arizona Republicans, saying “This state is no stranger to Republicans who say one thing and do another.”

“In an irony that could only be given to us by God,” Kirk said the Democrats have a “renegade” in their own ranks with U.S. Senator Kyrsten Sinema.

Sinema, he said, “is more Republican than John McCain ever was.” 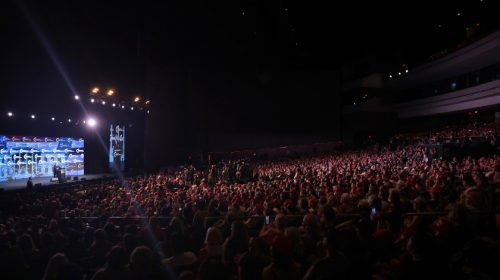 The political class in the state over the past couple decades, Kirk said, makes Arizonans feel like they’re alone.

Kirk pointed out that the legalization of pot and some of the highest tax rates in the southwest isn’t because Republicans are too conservative, but because every single conservative acts more like a Democrat than a Republican.

Kirk was not understating the current situation when he said Arizona is now the center of American politics.

With its two Democrat U.S. Senators and more registered Republicans than Democrats, Arizona is going to dictate whether America – the greatest country in the world – will continue.

Kirk, whose organization has been proactive on college campuses for years, said that conservatives win when we play offense and set the terms of engagement.

He said, “The person who taught us that was President Trump,” who played offense for four years.

“Today the Arizona comeback begins,” said Kirk.  “We are going to win!” 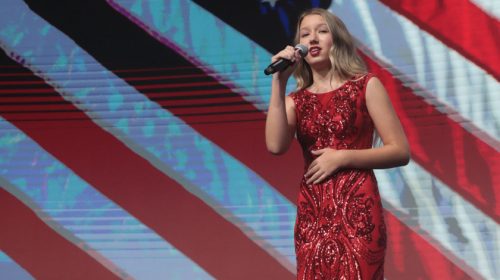 The event was kicked off, after a beautiful rendition of the national anthem by Roosevelt Rawls, by Chairman of the Arizona Young Republicans Austin Smith, who emphasized the importance of grassroots efforts in retiring Democrats.

Happy to have the event underway, audience broke into its first of many roars when he specifically mentioned retiring House Speaker Nancy Pelosi and Democrat U.S. Senator from Arizona Mark Kelly, with the cheering only outdone when he dropped the name of current and highly partisan Arizona Secretary of State Katie Hobbs.

Pinal County Sheriff Mark Lamb, who took the occasion to quote both Thomas Paine and Shakespeare in his brief remarks, had the role of introducing Arizona’s Republican gubernatorial candidates.

Current Arizona State Treasurer Kimberly Yee said that in 2016, when fake Republicans were refusing to go to the Republican National Convention, she was “proud, not only to attend, but to speak in support of Donald J. Trump’s nomination, representing the great state of Arizona and conservative Republicans of America.”

While candidate Steve Gaynor wanted to be introduced by Lamb as an outsider and businessman, he relayed the history of his 2014 run for Secretary of State, where he, similar to Trump, saw his significant 40,000 vote lead vanish over the ensuing two weeks. 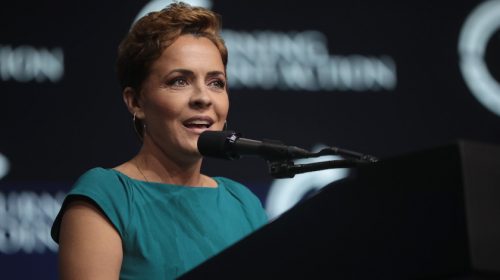 While Yee and Gaynor were received well, it was obvious that Kari Lake was the clear favorite of the Republican gubernatorial primary candidates.

Introduced by Lamb as “the next governor,” at her request, Lake was met with enthusiastic cheers of “Kari, Kari, Kari.”

When Trump later recognized her during his speech and she rose, the audience reaction caused Trump to take note and respond, “Wow.  This may be a good night for you.”

Lake, who made national news when she cut short her very successful career as a news anchor at a local Fox station, described herself as a “proud conservative and unapologetic Trump Republican running to make Arizona great again.”

One of the most engaging speakers of the day, after hitting a lot of hot button issues, the audience again chanted “Kari, Kari, Kari” before the music signaled the end of her time.

Matt Salmon, who had a large contingent of campaign staff dressed in red t-shirts working the crowd as they awaited entry to the theater, was a founder of the U.S. House Freedom Caucus and is now running as a Republican primary candidate for governor.

Chair of the Arizona Republican Party, Dr. Kelli Ward, gave tough talk against the “namby-pamby, wimpy Republicans” that it’s not her job to give cover to. 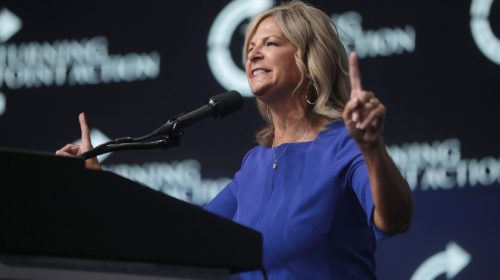 “In other words,” said Ward, “I am the butt kicker in chief, not the butt kisser.”

As one who ran for the office herself a few times, Ward introduced the Republican primary candidates for U.S. Senate, who she said are “head and shoulders above the astronaut” and current Democrat U.S. Senator Mark Kelly.

As a commanding general of the Arizona National Guard, Mick McGuire, said that when he is asked what he is most worried about he responds that it is not external threats but being destroyed from the inside out.

Cold War veteran Jim Lamon said he is not a politician, but a University of Alabama linebacker and businessman with a $1 billion American-made company that employs over 1,600 people of which 22 percent are veterans.

Lamon said that behind the scenes he has been supporting Republicans for years, donating $3 million to the election of Trump and other conservatives like Arizona Congress members Paul Gosar (R-AZ-04), Andy Biggs (R-AZ-05) and Debbie Lesko (R-AZ-08) – folks, he said, that need to go back to Washington.

If elected, Lamon committed to not taking a salary or a pension as a U.S. Senator.

Blake Masters, a close associate of billionaire Peter Thiel, only announced his intention to run in the Republican primary for U.S. Senate two weeks ago, but caught the attention of the mainstream media for saying people ought to be able to raise a family on a single income.

Secretary of State candidate Mark Finchem, who is currently a State Representative, was unable to attend the event.  He was in Michigan “fighting for election integrity measures,” according to Justin Olson State Corporation Commissioner who introduced the candidates for that office.

Another current State Representative, Shawnna Bolick, said she is running to depoliticize the office and reviewed a list of election-related legislation that passed this year.

The third candidate, State Senator Michelle Ugenti-Rita was booed as soon as she took the stage.  When she tried to make her pitch for the office, she told the crowd “Listen up!” as they got so loud as to drown her out.

It was to no effect, and although she tried to continue her speech, the crowd continued causing her to march off the stage saying she would be the one to win the race. 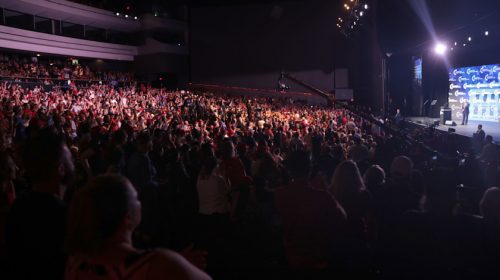 Congresswoman Leski, who was one of eight on Trump’s impeachment defense team, said she started out as a precinct captain – a position attendees were encouraged to pursue several times throughout the day – and went on to become a state representative, a state senator, and then U.S. representative.

Throughout his somewhat lengthy remarks compared to other speakers, there were shouts of “We love you.”

He recommended attendees watch an election documentary called Kill Chain, in which Democrats expose in their own words a voting machine “feature” called skip and delete.

Gosar discussed several topics, but focused on the events of January 6 in Washington D.C.  He called for the release of the 14,000 hours of video and the release of those who entered the Capitol and have been jailed for six months.

He also called for a pause, as he walked to the side of the stage, to recognize the mother of the murdered Ashli Babbitt who held signs call for justice.  A palpable somberness came over the crowd as they stood in reverence and told the grieving mother “We love you.”

In concluding, Gosar was visibly emotional as he said it was it his greatest pleasure to serve.

Biggs, the current leader of the House Freedom Caucus, said that with so many issues facing the country, the one solution is accountability.

The video of the full “Rally to Protect Our Elections” hosted by Turning Point Action and featuring former President Donald Trump is available from Right Side Broadcasting News here.