Lake is concerned that Hobbs will not conduct the election fairly for Republicans like herself in the race. She asked other candidates to join her demand. She cited a tweet from Hobbs in 2017, where Hobbs said, “.@realDonaldTrump has made it abundantly clear he’s more interested in pandering to his neo-nazi base than being @POTUS for all Americans.” Hobbs did not delete the tweet.

.@realDonaldTrump has made it abundantly clear he's more interested in pandering to his neo-nazi base than being @POTUS for all Americans.

Another tweet from Hobbs that year said Trump is “on the side of the freaking Nazis.”

Hobbs attacked the Maricopa County election audit numerous times. She attempted to stop it from taking place. She said, “these conspiracy theories are indeed baseless.” She tried to get the Biden administration to investigate the audit. Ken Bennett, a former secretary of state himself, who serves as the Senate liaison for the audit, dismissed her criticisms as baseless. In response to a letter she sent to him listing her complaints, he said, “I think that most of the things in her letter are completely unfounded,” he said. “And the ones that have a little bit of legitimacy can be dealt with pretty easily.” Hobbs’ “election expert” was caught a few months ago impersonating a reporter in an attempt to sneak into the ballot auditing area. 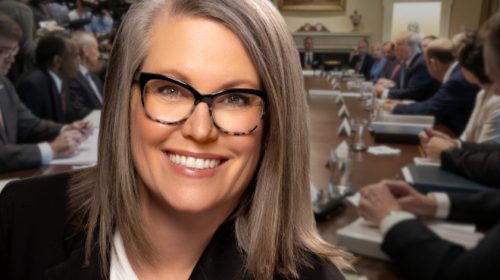 Lake cited Hobbs’ lack of concern over election fraud despite preliminary results from the Maricopa County ballot audit. Last week, the Arizona Senate revealed during a hearing that auditors discovered nearly 4,000 voters who registered after the October 15 deadline last fall. Another 18,000 voted but strangely disappeared from the voter rolls afterwards. Thousands of duplicate ballots had no serial number on them. Over 74,000 more ballots were received and counted than were sent out.

Hobbs filed over 12 bar complaints against Arizona Attorney General Mark Brnovich and his top staff over their work combating ballot fraud. After refusing to defend lawsuits against the state challenging its election laws, Brnovich and the Arizona Republican Party stepped in to defend them instead. Brnovich argued the consolidated cases in front of the U.S. Supreme Court in March, and the high court ruled in his favor earlier this month, holding in Brnovich v. DNC that Arizona laws banning ballot harvesting and out-of-precinct voting are not racist.

As a result of Hobbs deserting the state on those lawsuits, the Arizona Legislature removed her’ powers to defend state election laws and transferred them to the Arizona Attorney General as part of a budget bill that passed into law on June 29.

Hobbs is supported by iVote (formerly the Secretary of State Project), a left-wing organization that receives funding from billionaire George Soros. iVote gets involved in state secretary of state races, and lists Arizona as one of its seven target states. The organization advocates for automatic voter registration. Hobbs is also backed by the Soros organization Democracy Alliance. She has a 14% rating from the American Conservative Union, a 0% rating by the NRA, a 100% rating by the Arizona Education Association, a 14% rating by Americans for Prosperity and a 100% rating from the Sierra Club.

It is becoming clearer each day that AZ will “recuse” radical progressive leftist Hobbs from government service in November 2022. #VoteGOP https://t.co/3p8M9xJ5Jv

Rachel Alexander is a reporter at the Arizona Sun Times and The Star News Network. Follow Rachel on Twitter. Email tips to [email protected].